The Source reported that the former boxer revealed in a recent episode of this podcast, “Hotboxin’ with Mike Tyson,” that he and his business partner, former NFL athlete and fellow cannabis advocate Eben Britton smoke about $40,000 worth of weed on their ranch a month.

“We smoke 10 tons of weed at the ranch a month,” Britton said.

“Ain’t that crazy?” Tyson asked. “We take it for granted.”

Rapper Jim Jones, who was a guest on the episode, was surprised.

Tyson added that $400,000 to $500,000 a month goes toward his cannabis business, Tyson Ranch, which includes his recently announced CBD-enhanced drink line called DWiink. He and Britton are also in the process of building a 420-acre cannabis-friendly resort and wellness center in Desert Hot Springs, California.

The full interview can be watched on YouTube. It contains explicit language.

In this latest installment of #SashasSecrets, our girl Sasha The Diva and Chef Will Brown share their thoughts on Billy Porter‘s Essence cover, Brandy‘s stalker and the NFL playing the Black National Anthem. 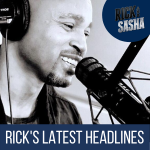